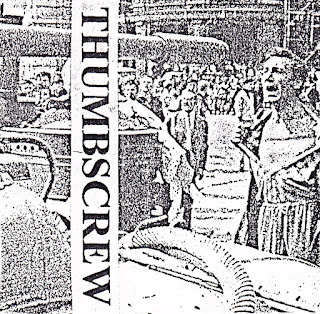 I had only previously heard this short-lived HC band through their contribution to the 'Wade Free Vancouver' comp that I posted a few weeks back. Their song 'Assimilate' was taken from this demo, which I've finally heard in it's entirety for the first time when it was lent to me recently. There's a few rough spots on this cassette, but considering it's twenty years old I guess that's to be expected. Members of this band would later go on to play in local acts such as Strain, Capone, Pipebomb, The Spitfires, By A Thread, and I'm sure many more. 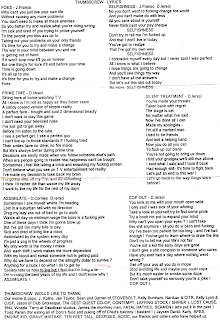 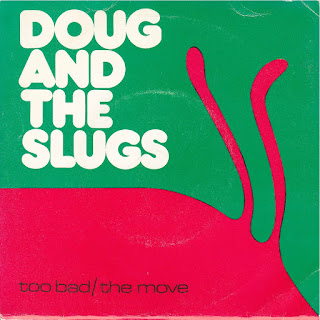 Since today is Father's Day, I thought I'd post the debut single of my late Dad's favorite band, Doug And The Slugs. I can't listen to these guys and not think about him. Unfortunately, most of the band's discography was never released on CD, with the exception of a 'Best Of' compilation, Slugology 101. So once I bought my first USB turntable, I had plans of buying of their all of their back catalog on vinyl and ripping them to CD for him to replace his old worn out cassettes. I never got around to finding them all before he passed away from cancer in January 2009, but I know he appreciated the effort. He was stoked when I burnt him a CD-R of Shel Silverstien's "Freakin' At The Freakers Ball", something he only had on a dubbed tape until I found a beat up copy of the record for his birthday one year. 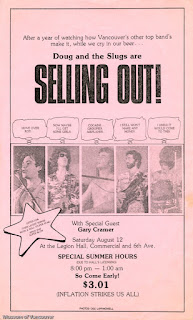 I bought this single for a buck, mainly for the B-Side. I never listened to the A-Side because I assumed this version of "Too Bad" was same version that we all know and love. It wasn't until I read on their website that these two songs were from their first recording session in September 1979.

"This original single recording (with "The Move" on the back) was produced as a 45rpm and, unfortunately, the original master tape was recycled following the pressing. The version of "Too Bad" that most of us hear today was a new recording done in May 1980 when RCA distributed the Slugs' first album."

So that means this single won't be getting reissued anytime soon, then again neither is the rest of their discography it seems. While I guess you can say the newer version of 'Too Bad' is bit better than this one, it's cool to hear some now rare stuff from this band. That is, if you're a fan like I am. The song on the flipside, "The Move" is pretty good tune as well, and gets props for mentioning the Lions Gate Bridge. I'm sure if you go into any record store in the Vancouver area, you'll find this 7". Happy Father's Day! 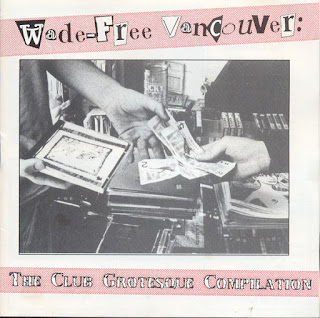 Listening to this comp is sorta like digging up a time capsule of the punk, hardcore and alternative music scene in Vancouver(and Greater Vancouver area) 20 years ago. Like most CDs that came out in the 80's and 90's, I found this disc pretty quiet compared to the newer released music on my itunes. So I thought I'd "remaster" it for y'all. In others words, using Audacity to amplify the tracks. Enjoy. 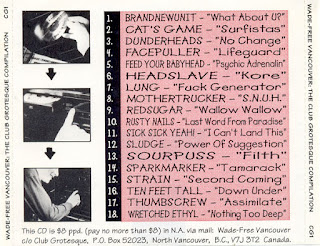 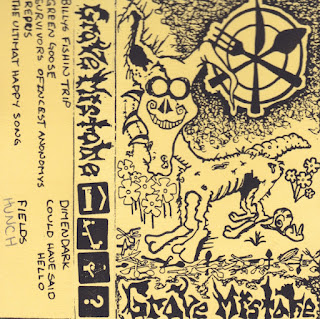 While I remember seeing this Maple Ridge band's name on flyers back in the day, I never saw them live. In fact I never heard their recordings until I received this demo last week. There is definitely an early 90's sound here, but at the same time you can tell they weren't trying to sound like anyone else. I was told they also recorded two other demos as well. Members from Grave Mistake later went on to play in other local bands such as The New Town Animals and The Spitfires, to name a few.


***UPDATE NOVEMBER 12, 2019***
I finally have an 'official' copy of this cassette so I decided to rip it and replace the original one I posted as it was taken from a 2nd generation tape. I think it sounds a bit better. Thanks Rob Hope for the 'new' tape and thanks again Shay for hooking me up with the dubbed tape back in 2013! 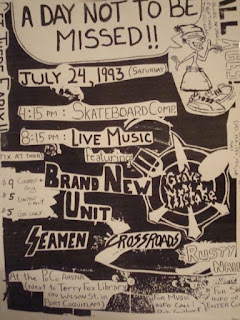